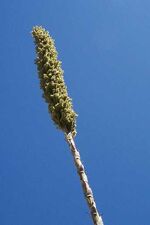 Tucson is a city and the county seat of Pima County, Arizona. As of the 2000 census, the city had a total population of 486,699, with a metropolitan-area population of 843,746. A July 1, 2003 Census estimate put the city's population at 507,658. It is the largest city in southern Arizona, and the second largest in the state after Phoenix. The name Tucson comes via Spanish from the O'odham, meaning "Black Foothills," a reference to the mostly volcanic mountains on the west side of the city. The most notable of these foothills is Sentinel Peak, better known as "A Mountain" because it sports a large letter A in honor of the University of Arizona. Tucson is sometimes referred to as "The Old Pueblo."

Tucson was originally inhabited around 7000 BC by early Paleo-Indians, and later replaced by groups designated by archaeologists as the Hohokam. As such, Tucson is the longest continuously inhabited location in the United States.

Jesuit missionary Eusebio Francisco Kino visited the area in 1692, and founded the Mission San Xavier del Bac in 1700. The Spanish established a presidio (fort) in 1776 and the town came to be called "Tucson." Tucson became a part of Mexico after Mexico gained independence from Spain in 1821. Following the Gadsden purchase in 1853, Tucson became a part of the United States of America. From August 1861, until mid-1862, Tucson was the capital of the Confederate States of America|Confederate Territory of Arizona. Until 1863, Tucson and all of Arizona was part of the New Mexico Territory. From 1867 to 1889, Tucson was the capital of the Arizona Territory. The University of Arizona, located in Tucson, was founded in 1885.

Tucson is home to the University of Arizona, a state-run land-grant university which provides many jobs and economic stimulus to the local economy.

Davis-Monthan Air Force Base, located on the southeastern edge of the city, also provides many jobs for Tucson residents.

The city's largest private employer is the Raytheon missile factory.

The Tucson Gem & Mineral Show is held every year in February for two weeks (open + one week for professionals). It is one of the largest and most well-known gem and mineral shows anywhere, and it features the many of the finest mineral specimens available. There is no single location for display of minerals, but rather dozens of locations spread across town: many big hotels and most motels are occupied for the occasion, professionals even display their specimens in hotel bedrooms, lobbies, under tents, and on lawns. The show has an estimated attendance of more than 35,000 people from over twenty countries. Attendees frequently include the general public, experts, beginning collectors, museum employees, dealers, retailers, and researchers. Many museums and universities, including the Smithsonian Institution and the Sorbonne, have displayed materials at the show.

Retrieved from "https://cities.fandom.com/wiki/Tucson:About?oldid=13809"
Community content is available under CC-BY-SA unless otherwise noted.