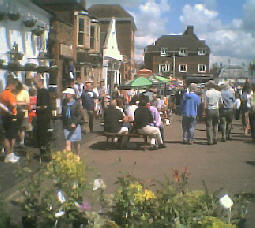 This Wikia is designed to display generally positive information about towns and cities -- places you've lived, played, or worked. Tell about your favorite spots or give advice for visitors. Let people know about good places to eat, vacation, or play. Talk about schools, people, and societies.

This Wikia has 1,089 articles now, but would be better with ten times that number. You can help. Yes, if you can type you can edit most of these pages!

Pages to start on:

Some places with good material but virtually neglected for months

(If you live in one of them, please add a few lines or a subpage!}

(If you live somewhere else, please write about it.)

Gold Star Communities is a place to share something special or unique about your town, village, or city.

State of emergency on the whole planet. The world is fundamentally being cut out and measured, everybody wants to build Sokobanjas, but God says: 'No, it exists somewhere already'. Sokobanja is becoming one of the most interesting tourist destinations for young people and at present it is definitively number one in the tourist scene of Serbia.

Number One city in the East

Retrieved from "https://cities.fandom.com/wiki/Main_Page?oldid=10711"
Community content is available under CC-BY-SA unless otherwise noted.