Wikipedia has a page called:
Kairouan

Kairouan, Al Qayrawan, Kairwan, or Kayrawan, an inland city of about 160,000 people in north-central Tunisia, is a UNESCO World Heritage Site and North Africa's most holy city. It has earned the name "City of 100 Mosques".

Prime religious building is the Great Mosque, which is nearly 13 centuries old (though it has been almost destroyed and rebuilt at least twice). Its minaret dates from about 730, probably the earliest minaret still in existence. 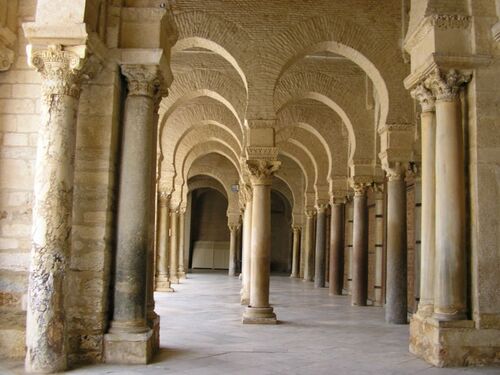 Kairouan is 160 km south of Tunis, 60 km west of Sousse, and south-east of the Tell Mountains, on the Low Steppes, a fairly dry alluvial plain.

Founded in 670 by Uqba bin Nafi l-Fihri, and suffering occupation by Berbers from 757 to 761, Kairouan became the capital of the whole Maghreb region by the 9th century, and the capital of newly independent Tunisia briefly two centuries later.

A bloodless invasion by the French in 1881 led to almost a century of French rule. French remains one of the official languages.

After its sacking by the Fatimids in 1057 it never recovered all its administrative functions, although it has been an administrative centre for the last 500 years. It has been primarily a market town through the centuries, trading in local sheep and other livestock (and their products), grain, olives, and copperware.

Tourism is the main income earner now, with carpets, leather goods, and vases prominent among the merchandise in the "souk".

Retrieved from "https://cities.fandom.com/wiki/Kairouan?oldid=15408"
Community content is available under CC-BY-SA unless otherwise noted.